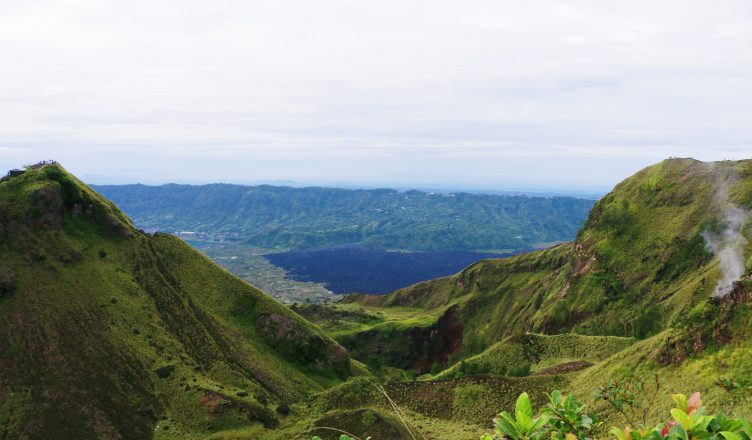 The Gunung Batur is one of two volcanoes here on Bali. It is located in the north of the island, in a big caldera and can be climbed together with a guide. We did this tour during our stay in Bali and would like to give you our advice for the planning and preparation of the tour.

It should be noted, that there is more than one “sunrise tour” on Bali. The Gunung Agung is the second volcano on Bali and much higher than Gungung Batur. From the summit of the mountain it is said, that on a clear day you can see the whole island. Additionally you can combine your trip here with a visit at the most important temples of the island.

Nevertheless, we decided to do a tour to Gunung Batur. Many people prefer the view over the caldera and at is easy to combine a trip to Gunung Batur with a visit at the nearby hot springs.

If you want to inquire about a tour to this mountain from lets say Denpasar, you will often hear a price of roughly 50€ per person. I suppose that you can still push the prices down a bit, but we found this way too much and thought about climbing the mountain on our own. For several reasons (that I will explain later in this article) you should not do this – we did however find some ways, how you can safe a lot of money.

The Arrival at Gunung Batur

The most important aspect is, that you have to plan the journey yourself, at least to a certain degree. The day before our ascent, we took a trip to the village of Toya Bungkah, which is right at the foot of the volcano inside the caldera. To get there, you will have to take the road from Ubud to the rice terraces and follow that road up until you reach the outer crater rim of the caldera. If you haven’t checked them yet, here are some tipps about riding a scooter on Bali.

At the crossing here you will have to pay a small entrance fee, which will directly be awarded by this awesome panorama over the caldera and the volcano. To get to Toya Bungkah, you should take the road to the right and follow it along the rim to the first intersection. Take a left and follow the road down into the valley. Pay attention here, the street is very steep and has many curves so drive slowly. Once you reach the bottom, you can see signs to Toya Bungkah, which you just have to follow.

We found out, that it is in fact possible to find a guide the day before the ascend. Because we made the trip on our own, we could safe a lot of money and paid a total of €30 for two people. I think that this is a huge difference, but we have to mention that we didn’t travel in season and that it does not include any accomodation (you wouldn’t need one if you had a trip from Denpasar).
While negotiating, pay attention to which summit you will go. There are in fact several summits and not all of them are equally high. I think the view is the same from all of them, but if you want to be able to say you’ve been on the highest one, you should mention that to your guide.

Since you will definitely see other groups and guides during ascend, on the summit and on your way back, you should pay attention to these points – I assume that nobody wants to find out what happens if you don’t.

This all sounds like a lot of pressure, but I can assure you, that getting a guide also has its benefits. We met our guide when we were watching the current procession for a wedding that was taking place in Toya Bungkah at that time. After the procession was over, we agreed on our tour and our guide invited us to come over to his place. We had some Balinese coffee and had a talk about the life in the caldera and its history, a memory that you will probably not get as a ressort tourist.

In the end, he also helped us to find a nice hotel with a hot spring. We stayed in Arlinas Inn, which is pretty much in the middle of the village and has some nice bungalows and its own hot spring.

After enjoying the hot springs for a while, we had to prepare for the tour. Here are our tips:

The Ascent to the volcano

Lets talk about the actual tour now. We set off at our hotel at about 4 am and took our scooter to drive to the starting point.

From there we hiked through the jungle for some time, watch out here for roots and rocks and also don’t leave the trail – there are some high cliffs around here as well.
After this, we walked over a solid lava field for roughly an hour, which is quite rocky as we mentioned. Take your time to turn around every now and then, the view over the caldera is amazing!

We arrived at the summit about 20 minutes before sunrise, from where you can admire the beautiful view or just enjoy the experience of standing right on top of a volcano. For breakfast, you can have an egg that was boiled by the volcano itself- doesn’t taste much different from a normal egg but I don’t know anybody who would want to miss out on the experience 😉

The following hike back to the village took about half the time that we needed for the ascent. Pay attention though when you are in the lava field again, it is very easy to slip when walking downhill.

After climbing Gunung Batur, we also planned to climb Gunung Agung but we had to cancel the trip due to bad weather conditions. If you are interested in climbing that volcano, I recommend you to check out this website. It should be mentioned, that Gunung Agung is much higher and even challenging for experienced hikers. If you’re out for a relaxing holidays, we believe that Gunung Batur is a nice experience for everybody. If on the other hand you want to test your own limit as a hiker, you should put Gunung Agung on your list.

One thought on “How to climb a volcano – Gunung Batur in Bali!”