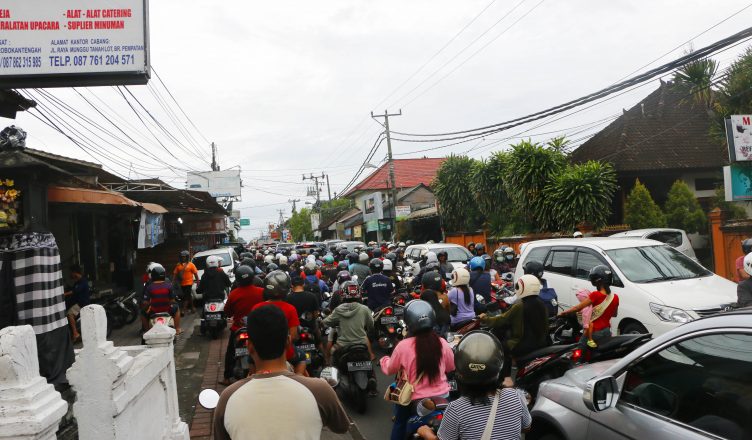 As we mentioned in our introduction about Bali, renting a scooter is a great opportunity not only to explore the island, but also to safe a lot of money. There are however a few things you have to pay attention to, in fact, we can’t even recommend everybody to rent a scooter. In this article, we want to tell you about our experiences on Balinese streets and give you our advice and recommendations.

While introducing, I want to say a few words about our previous experiences on the road. I have a normal, German driving license, allowing me to drive cars and other small vehicles such as scooters. Since I am living in China for about one and a half years now, I can’t say that I have much of road experience in the west, however I also have a scooter in China, which allows me to say that I am quite familiar with Asian streets.

During our time in Bali, I covered about 700 km of distance with our scooter, mainly around Denpasar but also on different trips to the countryside.

The majority of scooters on Bali are Japanese models, especially Honda scooters were very popular during our stay. Chances are, that you are going to rent a Honda Scoopy or a similar model during your stay, however you can also spot some other scooters on the street like for example Vespas.

The scooters are usually automatic with 110cc. This is actually quite a bit for a scooter and enables you to drive up to 100 km/h (we can’t recommend you to drive this fast though).
If you never sat on a scooter before, you should probably think twice whether you should really rent one. Even I was surprised how much power our scooter had and in fact, how heavy it was as well.

If you decide that you’re okay to ride one, you can rent a scooter for roughly 3,50€ per day, however there are bigger discounts if you decide to rent one for lets say a month.
We rented out scooter at a small rental in Sanur, but actually, there are many scooter rentals spread all over the island.

An important point you should pay attention to is, that you get enough helmets. Apart from the fact that it is simply safer to wear one, it is also mandatory to wear one in Indonesia. Especially foreigners are being picked out by the police for not wearing one.

Another obvious point, but also pay attention to the condition of your scooter upon renting. If there are any scratches or dents, talk to your renter first and if there is anything that doesn’t work (especially the breaks) insist on getting another one. Trust us, we made some experiences on that in the Philippines.

The price for fuel in Indonesia is incredibly cheap. Filling up our scooter only cost us something around 1€.

The streets are probably the main reason, why so many guides and websites discourage foreigners from riding scooters in Indonesia. You have to drive on the left side, there’s a huge chaos on the streets and many people are probably just not prepared for all these changes.

As mentioned above, I already have some experience driving around in Asia and furthermore, I don’t see why I should pay somebody else to drive me around like a maniac.

From my experience, the transition from right-hand traffic to left-hand traffic clearly is the easiest part. For a few days, you have to think about it but that will gradually stop and you will get used to driving on the left in no time.

The traffic in Bali is the real struggle. Indonesia is one of the most populous countries in the world and when I was driving, I had the feeling that all of them were on the street, some of them in a car, but most of them on a scooter. As you can imagine, the streets are most crowded in the southern part of Bali, around Denpasar.

Especially during rush hours, it might happen that the streets are so crowded, that even the traffic lights are switched off. The intersections are simply so overcrowded, it doesn’t really make any sense to follow the traffic lights.

To actually get from A to B, you can’t always wait around and hope that there is a gap that you can get into – our recommendation is to carefully roll into the traffic and hit the gas, when you found your spot.

While driving, we recommend to always have an eye on the side of the street. When especially Balinese people want to enter the traffic, they simply do. They assume, that as a driver, you are in charge for what is in front of you and everything that is behind them is somebody else’s problem. That means, they often just enter a street and drive on in their own speed, without paying attention whether there is somebody behind them or how fast other people are driving. In my opinion one of the main reasons why there are so many accidents on Indonesian streets.

For us as a foreigner that firstly means that we have to drive carefully and watch out. If you get into an accident, it doesn’t really matter whether it’s your fault or not, because it might be you who is laying in hospital and just got his holidays ruined.

The road conditions on Bali are mostly fine – mostly, because there are certainly places where you can drive quite fast (the highways or the toll road at the airport for example) but even on these streets there is a bump here and there that you will probably want to avoid. We therefore recommend never to drive faster than 60 km/h.

When you are driving around on the more rural areas in Bali, you also have to pay attention to the animals around you.
Cows for example usually are not living in an enclosure and might sometimes appear on the road

Another point are the monkeys that you can find all over Bali. They sometimes appear out of the jungle and either just cross the road or – given that they are alone in that moment – sit down and have a rest. You don’t really have to worry about them, we just want to recommend to drive slowly and carefully when encountering them. They are usually not scared of scooters, so they might actually just stay where they are when you make your way around them.

Sometimes, for example the monkeys around Uluwatu, check out parking scooters for water bottles and little snacks. Believe us, they know how to open all of them but what they don’t know is, how to recycle (not that I can blame them). Please don’t leave your bottles in your scooter, because firstly they might be gone when you come back and secondly, if they are, they might be taken away into the jungle.

This one looks like he’s waiting for his friends to start his scooter tour but in fact, it’s more likely that he’s out for a bottle of water or a snack.

As a last point about the streets in Bali we want to point out the processions. These processions usually happen when there is a wedding going on and all the people involved have a big celebration on the street. It’s quite a common picture on Balinese streets (we saw it twice during a little more than 1 month, so chances are good for you to see one as well) and it’s completely normal, that everything is blocked for them.
They are not really a big thing you need to worry about, because they are moving quite slowly and usually everything around them is just standing. It will therefore only cost you a bit of your time and for most people I think it’ll be worth the wait.
If you have seen them before or have another reason why you definitely need to get around them faster, we recommend to find another way as soon as you see that your side is standing and there is no car on the other side. If necessary, turn around.

Finding your way around Bali might be a big problem for a lot of people, which is why so many tour guides recommend their services, because they know their way around. Truth is, I can’t agree with them. Today, we all have our smartphones and navigation systems which can help us to find our way in new places. For our stay, we used two navigation softwares, Google Maps and Maps.me.

A lot of you can probably remember this app, because in fact, this is not the first time it is mentioned on this blog. I previously recommended it to be used in China, because you can download all the maps that you need and access them from wherever you are without having to use any wifi. Of course this also works in Indonesia. There are however a few disadvantages:

One point is, that you will always have to download the maps of an entire country. This seems a little bit unnecessary, if you are only going to use a portion of the maps as we did in Bali. It becomes especially annoying, if you have limited space on your phone.

Another problem are the frequent traffic jams, constructions etc. These road blocks can’t be seen by maps.me, so it might happen, that there are ways that might be a lot longer but would only take you a fraction of the time. Of course this is not really an issue on the country side since you very often don’t have an alternative route you could take, however it might be annoying in Denpasar where there are multiple options.

Of course I am not going to introduce Google Maps now. The App is pre-installed on all Android devices and I would be surprised if there was anybody telling me he never used the service. The reason why I am recommending it here is, that it’s the perfect complement for maps.me. It obviously needs a working internet connection to display traffic jams and the likes but on the other hand, you don’t need to download the whole of Indonesia.

To come to a conclusion here, I would recommend travelers in Bali to use maps.me whenever they are on the country side or about to have a long trip to the other side of the island, while I would favour google maps when traveling around in Denpasar.

No matter which application you are using at the moment, please keep in mind not to use your phone while driving. Both applications will tell you automatically what you have to do, you don’t need to check your phone and endanger yourself in traffic.

We hope, that our tips can help you in your holidays on Bali. As mentioned before, riding around on a scooter is great: You can go wherever you want, you can enjoy some fresh air and don’t need to sit squeezed up in some tiny bus. Have fun in your holidays and drive carefully!