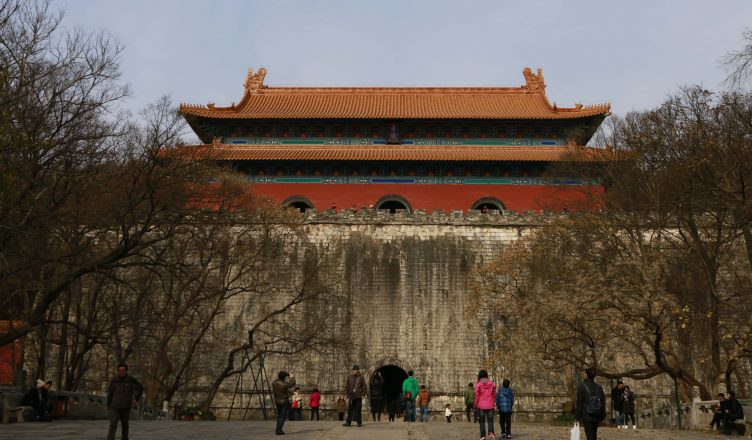 Nanjing, literally translated the southern capital, is the northwestern most metropolis in the Yangtse River Delta. Of course, the city isn’t the capital of China anymore but still, the city offers a vast history that shaped both the cities and the countries development over the last 2000 years.

Because of it’s location, the city is an important hub for transportation in the west of Shaghai. Of course, it can be reached easily by train or plane from almost any big city in China.

The East of the city

Most of destinations in Nanjing can be found in the East of the city, in particular, in the national park Zhongshanling (中山陵) which is also known as Purple Mountain in English.
Depending on your destination, there are three different Metrostation that should be considered: Xiamafang (下马坊), Muxuyuan (苜蓿园) or Minggugong (明故宫). We recommend to start at Minggugong and go from west to east to Xiamafang and stop at the destinations that seem interesting.

The City Wall of Nanjing

In China, you can not only find the great wall, but also the biggest city wall in the world. The city wall of Nanjing has a total length of 35 Km, encloses the entire city center of Nanjing and is still in a good condition today.
There are many places where you can access it for free, but we decided to enter it at the Zhongshan Gate (中山门), since it was directly on our way. The entrance fee at this gate is 30 Yuan for adults, 15 for students like us. From here, you can enjoy a view over the skyline of Nanjing as well as the view over the Purple Mountains nearby.

From the gate itself, you can enjoy a great view over the city.

On top of the wall, you can start a hike, maybe the next gate will be a good destination.

The view over the city wall was definitely impressive, it has to be said though, that it is hard to get a real impression of the real size of the whole complex. To get a better imagination about it, you will probably have to take a small hike along here.

In the east of the city wall, you can find the Ming Xiaoling mausoleum and the gardens connected to it. The whole area is actually quite big and includes several small sights, which is probably the reason why you will have to pay an entrance fee of 70 Yuan (35 for students) at the entrance of the park.

When you entered the park, you will probably directly want to go to the big mausoleum which can be found in the back of the complex. Depending on where you entered the complex though, you will probably encounter one of the “spirit ways”.
From the east to the west, there is one spirit way with different animals such as lions, camels and elephants while the second spirit way, from the western entrance to the mausoleum, is guarded by statues of different warriors. Both warriors and animals will protect the emperor from possible enemies that might want to attack him.


The mausoleum itself is the tomb of the emperor Hongwu, a majestic complex that looks a little bit like the forbidden city in Beijing.

Our last destination on the Purple Mountain was the tomb of Sun Yat Sen, maybe the most important sight in the Purple Mountain, seen from today perspective. We reached the mausoleum by bus from the metro station Xiamafang but you can also reach it by crossing through the park of the Ming Mausoleum.

The mausoleum was build – as the name suggests – for Sun Yat Sen, the founder of the Kuomintang and therefore “father” of today’s China. He received an impressive mausoleum in a central location in the Purple Mountain, overlooking the whole National Park and much of the surrounding parts of Nanjing.

The mausoleum of Sun Yat Sen combines Chinese and Western Architecture. As you can see, it is a very popular destination.

In the city centre of Nanjing, there is a beautiful old town to be seen. It is called Fuzimiao (夫子庙) and can be reached through the metro station with the same name.
We gave the area a visit in the evening and were welcomed with a beautiful illumination. There are many big and small sights to be seen, we therefore recommend to wander around, check out the different alleys and maybe get a few snacks on the way.


The most famous sight of this old town is probably the Confucian temple Fuzimiao, obviously the namesake of this area. Inside the temple, you can find out about the story behind Confucius as well as the many schools that were indirectly founded by him.

The West of the city

Next to the Sun Yat Sen Mausoleum, there is one more very famous sight in Nanjing, which was not mentioned yet in this article: The Memorial for the massacre of Nanjing.
This memorial was built to remember the war crimes committed during the Japanese occupation in the second world war. Starting from the 13th December 1937, at least 200.000 people, mainly civilians, have been killed by Japanese forces.

Nevertheless, we want to encourage visitors of the city to pay the memorial a visit, we will do the same if we get another chance to visit Nanjing in the future. The memorial is very easy to be found, it is directly next to the metro station Yunjin Road (云锦路).

As mentioned, Nanjing has its own Airport, which can be found in the south of the city. It is connected with the city through metro line S2, so you can reach it very easily.

Of course, you can also reach Nanjing by train, the city has 2 stations: Nanjing Railway Station and Nanjing South Railway Station. Both are connected with the Metro System.

Generally speaking, the Metrosystem of Nanjing is very well developed. We could reach every destination by Metro and paid very little money for it. A metro ride of 10Km or less only costs 2 Yuan, if you plan well, transportation should be easy to be handled. By the way, the public transportation uses the same system as almost any other Chinese city today, our guide for transportation in Hangzhou is therefore also valid in Nanjing.

Here is a map of the Metro System in Nanjing, from Travel China guide: Map

During our stay, we had a room in the 7 Days Inn, next to the Metrostation Zhangfuyuan (张府园), a cheap and centrally located option for a stay in Nanjing. There are several other options around the Metrostation Xinjiekou (新街口) or inside Fuzimiao, please pay attention though that not every hotel accepts foreign visitors. We therefore recommend to find and book a hotel in advance or stick to big chains such as Ibis, Hanting or the international youth hostels.

We enjoyed our stay in Nanjing a lot, it is the best destination for visitors who are interested in history, since so many important events happened here. My personal highlight was the Sun Yat Sen Mausoleum, but generally speaking the purple mountains and the city had many interesting sights to offer, that could give you a glimpe into the past of the country.

We hope that you enjoyed out article about Nanjing!
Have you been there before? How did you like the city?
We are happy to read your comments and shares if you liked the article!