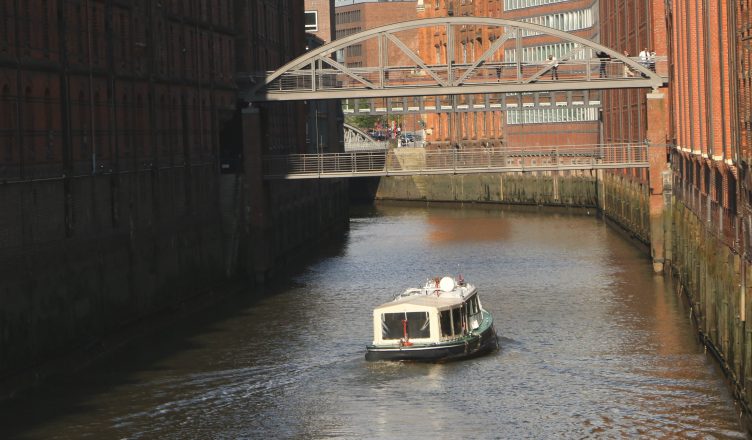 Some countries have really poetic ways of praising beautiful cities, we Germans are a little bit more direct: we say that Hamburg is the most beautiful city in the world.
Despite the fact, that we hardly had any time to visit Hamburg this year, I think that it is about time that I tell you why we think this way about the city. Hamburg is the biggest and one of the oldest harbors in Germany and since its foundation seamen always came back to see the river Elbe, the Michel and the Alster.

It is the second biggest German city and forms the biggest metropolis in the north of the country. Reaching Hamburg is easy from anywhere within Germany by coach, train or plane from outside of the country.

In the following, I will try to separate Hamburg into 3 parts. This is not to give you a route or a time frame, but to give you a better idea which destinations are closer to each other so you know which places you might want to combine. Reaching all destinations of one section in one day should be possible but (except for the first one) I would not recommend it.

Alster and centre of Hamburg

Most people will probably reach Hamburg at its beautiful train station, centrally located in the east of the lake Alster. From here, you can start your way down the Mönckebergstraße or Spittalerstraße, see the centre of Hamburg with the city hall and go to the Jungfernstieg to see the Alster.

Rounding the Alster is clearly possible but takes up about 3 hours, taking a boat tour around the lake and the surrounding canals is the fastest and most efficient way to see the area. Look out for “Alsterrundfahrten”, the company with a white swan on a red flag is the most well known company to offer boat trips at the Alster.


As you can imagine, this part of Hamburg is also one of the best areas for shopping. In the previously mentioned Spittaler Straße and the Europapassage you can buy all sorts of products from foods over books to clothes. If you also want to go for some more luxurious items, you should also check out the Alsterhaus, a famous German department store for the upper class.

The Hafencity and the Speicherstadt are to be found in the south east of the centre of Hamburg. The Hafencity is a relatively new district with designer apartments, a small marina for yachts and generally a place to life for the upper class.

The district got very well known for one of the biggest constructions in Germany: The Elbphilarmonie. Same as the new Airport BER in Berlin and the train station Stuttgart 21 the Elbphilarmonie was incredibly expensive and nobody really knew when this building is actually going to be finished. Thumbs up for Hamburg, the Elbphilarmonie is finally finished and the first tickets are available. Check out their website for up coming events and tickets: Link.

The Speicherstadt on the contrary is a very old district and was once the most important district for Hamburgs harbor. Before containers were used in shipping and the big terminal opposite of the Landungsbrücken was built, goods were usually transported in bags or small boxes and had to be stored somewhere.
Even though the Speicherstadt is not used for storage any longer, you can still smell the spices all around the Speicherstadt.

The Miniatur Wunderland was just recently announced to be the most popular German sight for foreigners to see. On 6,800 square meters, you can admire a big model train, with landscapes from different parts of Germany, Switzerland, America, Scandinavia and -just recently added- Italy. Additionally, there is the small town “Knuffingen”, a fictive small town as the team’s first project and a big airport with planes coming in from everywhere. While this model can give you a good impression of different sights from all over the world, you should also pay attention to the details – the Miniatur Wunderland holds surprises that you might not expect.

If you are more a fan of ghost houses and would like to find out about the dark past of Hamburg, consider visiting Hamburg dungeon. Right below the Miniatur Wunderland, you can find out about the big floods, the black death and pirates looting the city.

There are several other small museums around the Speicherstadt and the Hafencity, they can supply you with some more general information about the trade, the ships and the history of this area.

• Schifffahrtsmuseum: Museum about ships and navigation.
• Spicys Gewürzmuseum: for information on spices, were they came from, how they are used etc.

The West of central Hamburg

The last section will enclose the area west from the Landungsbrücken and St.Pauli.

The Landungsbrücken are the floating piers inside the River Elbe. Here, you can simply take a small walk, eat at a restaurant, start a harbor tour or a simple ride with the ferry.
If you want to see the Harbour, the harbourtour should obviously be your first choice but alternatively, you can also take the ferries to go to Teufelsbrück, from where you can hike your way back into the city along the beach of the river Elbe.


St. Pauli
At the western end of the Landungsbrücken you can find a long stair case leading into Hamburgs most famous district: St. Pauli.
St. Pauli can be compared to De Wallen in Amsterdam, especially the “Reeperbahn” is famous for all sorts of sex shops, brothels etc.
But there is a lot more to the Reeperbahn than you might think, while both the history and the audience on the Reeperbahn is almost the same as in Amsterdam, St.Pauli was always a stage to different musicians and world stars like for example the Beatles who started their career in the bars around the Große Freiheit. We recommend to take a look around, you can find bars and clubs for all sorts of music tastes around here, just watch over your belongings and don’t start arguments with anybody – that would probably end badly.

Fishmarket
There is kind of a tradition in Hamburg what you should be doing after a long Friday night of drinking and dancing on the Reeperbahn. Right at the river Elbe, about one kilometer from the clubs in town, you can find the fish market.
It starts in the early morning and features free life music and beverages in the stalls in the big market hall.
If you are tired of dancing and drinking or simply not interested in it at all, do not worry. It’s obviously not only a big party, but first and foremost a big market. You can buy the compulsory fisch, fruits and all sorts of other things, you can eat something or simply be surprised that Germany can actually seem chaotic.

Hamburg is often described as Germany’s door to the world, having the biggest harbor there were always people coming from all over the world. At the same time, Hamburg still remained their northern German appearance, always living close to the water.
Hamburg stands out with it’s international, but also deeply north German way of life, which makes it the most beautiful city in the world.

Have you been to Hamburg before? Is it the most beautiful town for you? Feel free to leave a comment, we are happy to discuss!