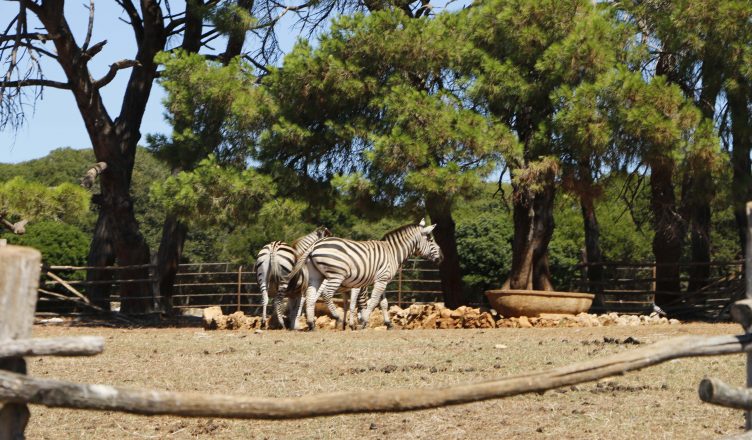 The last destination on our itinerary in Istria were the Brijuni Islands, or to be more precise: The national park on Veli Brijun. This island is very famous since it was used by Tito, the former dictator of Yugoslavia, as both his personal residence as well as a place for meetings with other statesmen.
He was very famous for his love for animals, so many guests brought him wild animals as a present for his safari park on the island. Some of these animals are still alive today and can still be seen roaming the enclosures with the offspring of other animals that deceased by now.

How do I get to Brijuni?

If you want to visit the island of Brijuni, you should be aware that there are only 2 operators who are allowed to land on Veli Brijun itself. Other operators of boat tours are only doing boat tours around the islands. I don’t want to say that doing a boat tour around the islands is something bad (in fact I think it can be really nice!), but you should be aware of the differences and should make clear what you want to do when booking the tour.

We booked our tour to Veli Brijun on the same day directly in Fazana, the next town on the mainland in Istria. While there are many tourist offices selling different tours, it seemed like the national park office directly at the pier is the only one selling tours to Veli Brijun.
The second operator starts its tour in Pula, both tours end up in the same groups as soon as you reach Veli Brijun.

The tour around Veli Brijun

The tour started with a short introduction about the island and its history. Furthermore, you will be told about the timetable the group will follow – groups seems to visit all things in a different order.

We started our tour with a visit of a museum, on the top floor you could see photos from the time when Tito was living on the island, on the bottom floor you could see taxidermically prepared animals – presents for Tito that passed away by now and got preserved for future visitors.

A big part of the island is used as a golf course, which was built in 1922 and was the biggest European golf course of its time.

The most famous inhabitant of the safari park is probably the Indian Elephant Lanka, who was a present from Indira Ghandi in 1974. I would like to show her to you but apparently she was not too interested in gaping tourists when we visited … Can’t blame her for that.

Afterwards, our train drove back to the harbour, where we had a short stop for a lunch break. The prices at the local shop seemed to be okay but beware of the wasps.

All in all, our trip to Brijuni was a great experience. Events that took place on the Brijuni Islands shaped Yugoslavia like only a few other places did. The safari park for example, despite the apparent inauthenticity, is actually a significant remain of this past.
Furthermore, there is a lot of nature for everybody to admire, not only the stunning 1600 year old olive tree but the beautiful islands in general with their vegetation and the animals living in the pristine blue water.

Would you like to visit the Brijuni Islands? What do you think about Zoos and Safari Parks like this one?
Leave a comment below, we are happy to discuss!

What else can we do in Istria?
1. See the small towns in the north!
2.Explore Pula!
3.Do a boat tour!