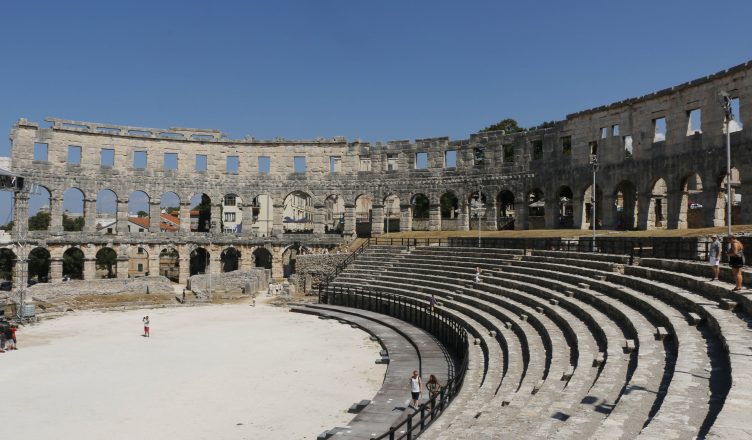 Our first visit to Pula is about 10 years ago. We remembered a city, that is mainly influenced by its port and the industry connected to it. Quite essential to a working economy but not exactly a visit we liked to remember. During this years visit though, our impression of the city changed completely. Why?

While the industry and the port are still a major part of the local economy, the town obviously embraced the local tourism a lot more – we discovered many more sights than on our first visit and in general, the streets had their typical southern European flair: quiet roads in the back while the main streets were busy with waiters and shop keepers catering for their customers.

Before we start to introduce the different sights that there are to see, we would like to recommend you to get the Pula card. Like in most other big towns, there are discount cards that allow you to enter all the sights at a lower rate. You should obviously visit most of them to get as much out of the card as possible but that is probably what you’re here for anyways.
The card is only available for a one-day trip and costs 90 Kuna per Person. Since Pula is relatively small (there are only 6 sights in total), the one-day card is more than sufficient. They are available at all sights included in this card.

The Arena of Pula

Then and now, the Amphitheatre is clearly the most impressive sight in Pula. It is built around 80 a.d. and therefore about as old as the big coliseum in Rome. Obviously it is a bit smaller but that is not exactly what you think about standing in this enormous, almost 2000 year old building. 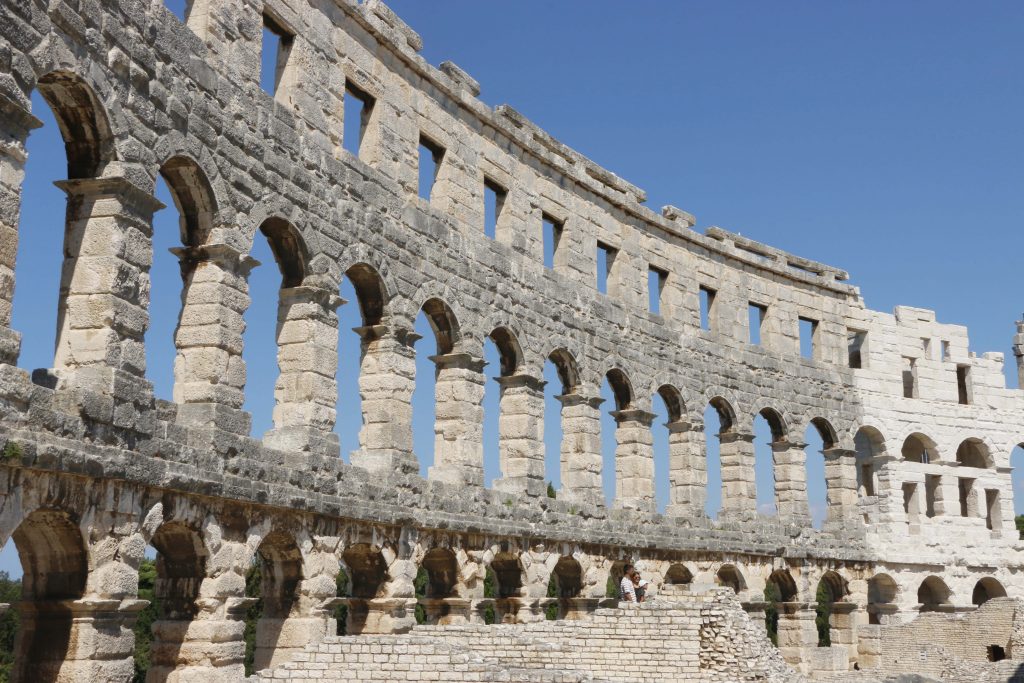 The other half shows what was underneath: rooms for gladiators to change or stables for the exotic animals brought here to fight in the arena.

Underneath the whole complex, there was a basement for storage. Today, you can find an exhibition about the Roman Empire in Istria here. You can find out which cities did already exist by then, how was the economy and how were the goods (especially olive oil) produced at that time.

The Kaštel of Pula

If you head from the amphitheatre towards the city, we recommend to head to the castle first. Standing on the hilltop, it is hard to miss and from up top, you can enjoy a great panorama over the town. Even though you can use the Pula card to enter the Castle, we decided to skip it and hike around. There are great panoramas over the surrounding city and the sea.

The tunnel system below the castle is an old remain from the time when Croatia was part of the Austrian Hungarian Empire. Today, you can find a small exhibition about different aspects of Pulas history: one about the Austrian airbase, introducing about Pulas part in the first world war, another exhibition about filmmaking, since Pula was the host of the annual jugoslavian filmfestival.

Used appropriately, the tunnels are obviously a good shortcut to go from one side of the castle to the other.

Augustus Temple and the Forum of Pula

Many of you have been in Churches, Mosques or Buddhist Temples before, but has anyone ever seen an ancient Roman temple? In fact, there are not many Roman temples left in this world and I won’t lie to you: The outside of this temple is clearly more impressive than its inside. After all, the temple is even older than the amphitheater.
The temple is included in the Pula card so we suggest to take a look anyways, inside you can see an old statue of emperor Augustus and several other sculptures.
You can find the temple right at the forum of Pula. A forum was basically a market place or public square of a roman city and in fact: the forum in Pula still is the main square of the old town, having many small shops and restaurants gathered around it.

You can see, that Pula is especially interesting if you like history, the old arena, the temple and generally the old town with its many arches make the town appear like a small version of Rome. Next to this, the old castle and the tunnel system below are another remain of the Austrian-Hungarian Empire. A great destination to understand the Istrian culture!

Have you been to Pula before? Would you like to? What is your impression of the city?
Feel free to leave a comment below, we are happy to discuss!

What else can we do in Istria?
1. See the small towns in the north!
2.Do a boat tour!
3.Visit the safari park on Veli Brijun!