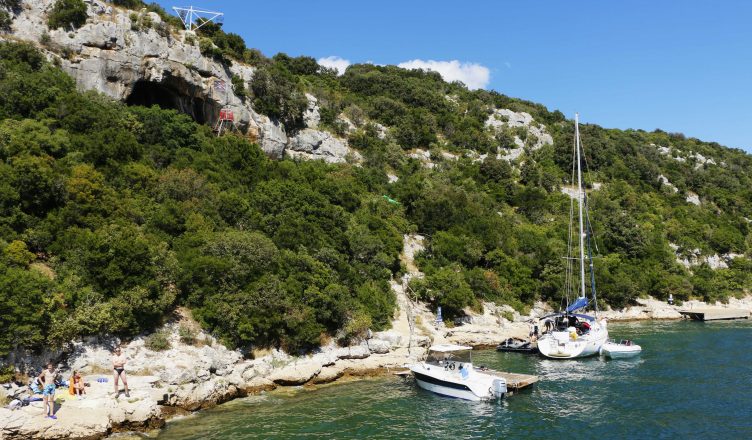 As we mentioned in a previous article, the best thing about Croatia is its the sparkling blue sea, so the best way to explore it should be by boat, shouldn’t it?
There are many destinations around and it might be hard to find the right one for you. We took a tour from Novigrad to Rivinj and to the Lim Fjord – in the north of Istria that’s the most common tour but in other towns there are other destinations available like Vrsar, the Brijuni Islands and Pula or even Mali Losinj in the Kvarner Region. Also, there are “dolphin tours” available now – I personally don’t support chasing animals for tourists but we heard positive feedback from other travelers so it’s at least worth mentioning.
We recommend to ask the seller for accurate information about the tour you’re planning to book so you know where you are going to spend how much time.

To give you a an overview over such a boat tour, we want to present Rovinj and the Lim Fjord which we saw on our tour and Vrsar, which we visited on another trip.

From the first sight of the town, you can already see who were the founders of this small town north of Pula: The Venetians build a replica of the famous Campanile (the Churchtower on the Markus place in Venice) right on top of the hill in Rovinj.
Apart from that, you can find almost everything that is typical for venice, except the canals and gondolas. Small alleys, easy access to the water, small squares where people drink their coffee.

While we visited the town, our guide also showed us the shop of Tomaso, a retired photographer for music magazines. Today, Tomaso is selling Istrian products such as the typical Istrian liquors Kruskovac, Juliska and our recommendation the Teranino but also other ingredients for cooking such as truffles and olive oils. Take a look at his store, it’s not only a recommendation for its products but also his old photographs from “the good old times”.
Watch out for his shop in the centre of the old town, close to the church.

After departing from Rovinj, most boats go straight for the Lim Fjord, a natural reserve for many kinds of fish, mussels or also sea needles.
Sadly, this year we were not very fortunate but from experience, the Lim Fjord is a great destination for snorkeling – the water is clear and there are many animals and waterplants to see.

Other than that, there is the “pirate cave”, today only a touristy destination for children but it is said that the cave has been the home to several real pirates in the past.


When booking your trip, please pay attention whether there is a stop in the Lim Fjord or not – there are some tours, that only go into the Lim Fjord without stopping and later on have a stop in Vrsar. While we always preferred the stop in the Lim Fjord, I think everybody should decide themselves which is the better destination (which is why we include Vrsar in this article as well).

The town of Vrsar mainly seems to be a destination because for its beautiful harbor. On the one hand, the Marina is very big, there are many yachts to see if you are interested in boats or simply hope to see some VIPs (good luck on that).
If you had enough of boats during the tour, we would recommend to head to the opposite direction. Between the mainland and the island which is protecting the harbor, there is a great place for swimming, snorkeling or simply laying in the sun to tan.

For the town itself, there is not a lot to see actually – it’s a small Istrian town at the coast, located on a hill top for a nice view over the harbor but to be honest: That’s it.

Taking a boat tour while being in Croatia is always a great idea and there are more than enough destinations to choose from. In following articles, we will also present Pula and the Brijuni Islands to give you a better idea of what places to see, it should be said though, that especially for the towns, the time schedules are usually too tight – there is always that one more thing you would like to see but then you have to go on to catch your boat.
Do you like to do boat tours? Have you done one in Croatia before? How did you like it?
We are happy to discuss in the comments!

What else can we do in Istria?
1. See the small towns in the north!
2.Explore Pula!
3.Visit the safari park on Veli Brijun!