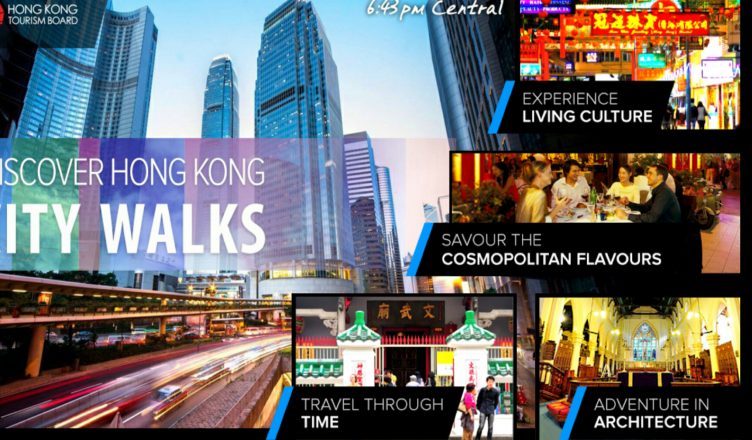 On the way to Hong Kong, Yong and I found “DiscoverHK”, an augmented reality travel guide for Hong Kong. I had never tried something like this before and we thought this could be a great and cheap way to get to know the area.

We opted for the ‘Travel through time tour’ as I wanted to know more about the history of Hong Kong. This tour starts at the MTR station ‘Sheung Wan’.

We headed there by foot and our first problem occurred: navigating using the maps function was difficult as the GPS location didn’t refresh automatically – this meant clicking refresh constantly but also that frequently your location was inaccurate.

From the start of the tour you can also use the descriptions in the app, however finding the starting point is quite a struggle if don’t arrive by MTR.

After a little bit of searching we finally found our way and could head on to the first destination, the western market. Inside the app you can find a lot of information about the building and its history. The building itself has been restored to become a mall – not exactly special and I struggled to get an impression of its former use.

From there we were led through narrow streets where we were told what made certain streets special such as selling dried sea food and many other strange things.

We found some of the first shops very interesting as they were selling some weird things but after being led through 5 different streets which seemed to be special for the same things we got bored. Instead we decided to take a short cut, however we ran into difficulties again because of the GPS.

The 5th sight was Possession Street, the place where the British first landed which historically is very important. The name caused a lot of controversy with the Chinese population and instead they called it ‘Big Puddle’. All that might sound interesting, but the street itself doesn’t really have anything to offer for tourists.

Unfortunately I found the whole tour rather monotonous, however Yong seemed to enjoy it. After being led through different streets selling different kinds of Asian things, we were led through the streets of Soho and Lang Kwai Fong – both well known for bars and clubs.

The idea of this app excited me a lot at first but sadly I was left disappointed.

Using an augmented reality to guide tourists through the city is not only an interesting experience, it also saves a lot of money. At the same time having multiple tours to choose from is really great, but you can probably find these in travel guides or on the internet as well. Another benefit of the application is that there are great descriptions for the sights so you can get an idea about the places directly from the app.

However as mentioned before I found the route quite monotonous but also the destinations don’t really fit together. The best time to go to market is usually the morning while the best time to go to bars is the evening. No matter what is more important to you, you will miss out on the other one.

On the technical side, there were problems with the GPS and also with the “See what’s around” button – it opens your phone camera and should display points of interest directly on the screen. In my opinion this should be one of the core elements of an augmented reality application but unfortunately it didn’t work.

I personally think that this kind of travel guide has a lot of potential, but there seems quite a bit of work that has to be done. I hope that the previously mentioned faults will be corrected, because I would love to try an improved version again!

Other things you can do or visit around Hong Kong:
1.Explore Hong Kong!
2.Visit Macau!
3.Go Hiking in Hong Kong!