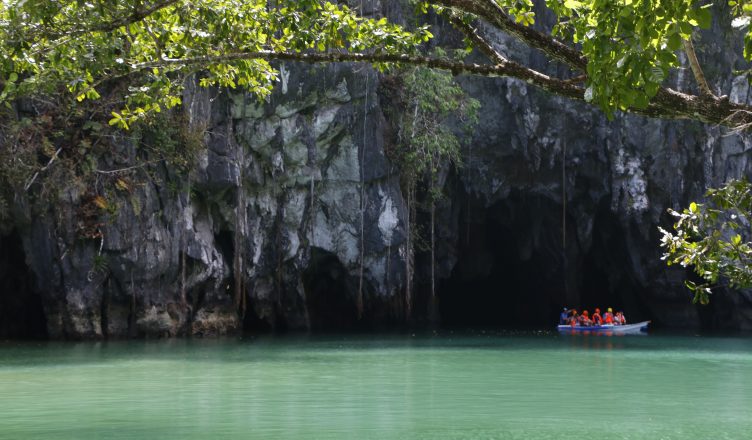 Disclaimer: All the information about the Philippines available on this blog is based on our stay in January 2016. Since then, the political situation in the country changed drastically. While we do believe that visiting the country will still be safe for tourists, we recommend to follow the recent news about the country closely and be in touch with your local embassy!

The city of Puerto Princesa is the capital of Palawan, but most travelers skip the town on their way to El Nido or other destinations throughout Palawan.

I personally can’t blame them, because except the baywalk there is nothing to see in Puerto Princesa itself – and let’s be honest, you find similar walks along the beach all around the Philippines.

Nevertheless, there is one destination on Palawan that you should visit making it necessary to stay in Puerto for at least one day: the world’s longest subterranean river. The Underground or Subterranean River is one of the 7 Wonders of Nature and so if you have time you should probably visit it.

To visit the Underground River, you will have to get a permit in Puerto Princesa first, which is available at the local Coliseum. The standard price for the permit is 1700 pesos.

The River itself is inside a national park close to the village Sabang which is about 1.5 hours from Puerto Princesa by car. We took a van to go there but there are also public jeepneys available – these will take you a little more time though.

They will drop you off at the pier in Sabang and here you can get a ticket for a Bangka (boat) which will bring you from Sabang into the National Park. As the attraction is so busy you will probably have to wait for some time.

The area has plenty of food shops where you can get everything from the local drink Halo-halo to French crepes. The prices are for tourists but you can find an all-you-can-eat Buffet for only 170 pesos if you follow the road along the beach.


To the right of the pier you can also find a beach where the water is fine for swimming.

The boat trip from Sabang to the national park takes about 20 minutes. The boat engine can be really loud so we would recommend bringing ear plugs.

The beach that you arrive at looks like paradise, from here you will go through a small jungle to the entrance of the cave. Again, you will have to wait until a boat is available. Unfortunately, you are not allowed to swim in a national park in the Philippines. We instead recommend using the time to take a look around and take some pictures.

When it is finally your turn to go into the underground river, you will be given an audio guide as well as a hard hat.

You board a kayak with your guide paddling you through the cave, while you listen to the information from the audio guide. The use of both an audio guide and a personal guide seems a little weird but this is because it is strictly forbidden to talk in the cave. Above your head there are a lot of bats sleeping on the ceiling and silence prevents people disturbing them. The guides on the boats however often greeted their colleagues as we passed by other boats.

Cameras with flashes are also forbidden, we tried taking pictures with our GoPro instead but we failed to get many good photos except for the ones that were taken when we left the cave. 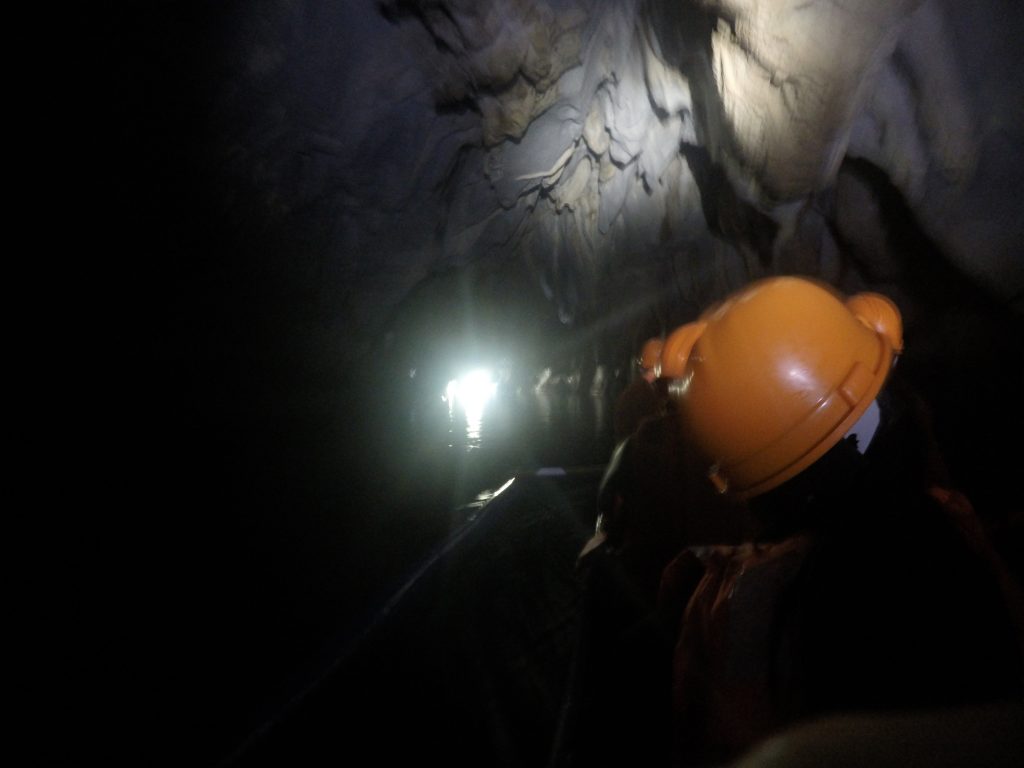 I personally found the caves very impressive, they were much larger than any other cave that I have seen before and navigating them in a boat is also a novelty.

You will see many different rock formations, many really looking interesting but it’s sad that you don’t have the time to look at everything at your own pace.

The Underground River is clearly the biggest sight in the national park and shouldn’t be missed on your tour through Palawan. The national park is also home to a huge variety of plants and animals as well as other sights like a mangrove river and different rock formations above ground.

The map that you are given when buying the permit shows all of the sights that are accessible to the public but as they seemed far away we didn’t consider them to be worth going to. The Underground River also takes up a lot of the day and so afterwards we decided it was time to go home.

Have you been to the Underground River in Puerto Princesa before? How did you like it? Share your opinion below!

More information for your stay in the Philippines:
1. Information about the country!
2. El Nido, a hidden paradise?
3. Coron, not only a divers heaven!
4. Hiking around rice terraces