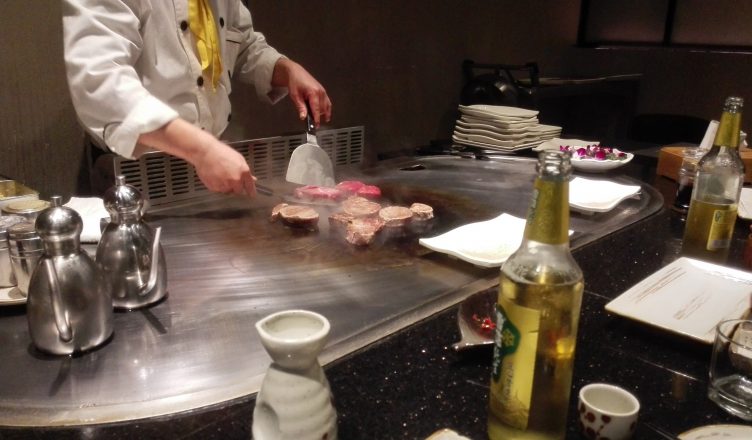 Today, I would like to tell you about this years Christmas eve.

As mentioned in a previous post, Ellis went back to England to visit his family and spend his holidays there. In the meantime Yong and I stayed in China, we organized a dinner at a Japanese restaurant to celebrate Christmas with some friends.

I personally have mixed feelings about this evening, but you can take a look for yourself!

The planing of the evening didn’t go very well, we all agreed that we wanted to eat at a Japanese all-you-can-eat buffet and even though there are many Japanese restaurants in Hangzhou we couldn’t book any of them in advance. All of them had a phone number but unfortunately nobody answered our calls. When it was about half past 6 in the evening, we decided to go to downtown and basically hope for the best.

While on the metro, Yong tried to call some restaurants and voilá! We found a restaurant near Jinjiang that still had some places available!

So we continued our little journey and arrived there just to be told that they don’t serve buffet. When the owners realised that we were not interested in the normal á la carte dinner, they apparently changed their minds and told us we can have an all you can eat á la carte for 178 RMB including beers and sake, the only restriction was that we could not order the really expensive stuff.

We wanted to have an all-you-can-eat and other shops in the city offered that for 130 to 150 RMB. Therefore this was actually more expensive than we all agreed we wanted to pay at first but nobody wanted to search for another restaurant again so we agreed on this deal.

We actually had our own room, with a grill in the middle and our own chef who prepared the meat and other dishes right in front of us – This was a really great experience!

We ordered a lot: different steaks, sushi and many other dishes. I never really ate Japanese food before – I tried sushi once back in Germany and didn’t really like it but I yesterday changed my mind about it!

It really was a great evening at this point, we had a lot of time to talk about different topics and try out new dishes.
The ice cream that we had as a dessert at the end was amazing, take a look at the video!

Fire and ice cream, how does that taste?

Below the ice cream, you might be able to see some bananas. Even if we had some really amazing steaks, this was probably the best part of the evening. It was not the ice cream that was special, I don’t even believe that the fire had any influence on the ice cream, it was more the mix with the hot bananas what made it so tasty.

But then the problems started. As mentioned before, we wanted to have all you can eat and of course, we would try out some of the expensive things. Over the course of the dinner we could gradually see in the faces of the waitresses that they were regretting the deal. As we were the first (and probably the last people) who got an all-you-can-eat, they could -just for fun- show us the normal receipt. There we finally saw why.

Such things happen every once in a while here in China and it’s really hard to handle such a situation. People agree to a deal and suddenly they find a reason to charge you more or give you an inferior service. I don’t agree with such things at all, an agreement is an agreement and you should have to stick to it. If you make a mistake, you should admit that and just face the consequences – in this case it was a pilot for an all-you-can-eat, it didn’t work out and you see you either have to charge more next time or just leave it be in future. However for this first experiment you have an agreement to fulfil.

Our waitress saw that we were discussing the issue and even if her English was not the best, it was clear to her that we were pissed. Finally they offered us to “just charge us 15 RMB more per person”, because they were “really sorry not to tell us in advance”. Either way we though that this situation was about the agreement, not the amount they were charging us extra.

At the same time, we wanted to avoid an argument with everybody in the restaurant. We didn’t arrive late but obviously we were the ones taking the most time and in the end we were the last customers. Nobody wanted to continue this argument so we decided to just pay the 15 RMB more. I was really unhappy about this situation and this actually messed up my experience of a Christmas eve that was really great apart from this issue.

Either way, I hope everybody else had a very nice holiday and could spend some time with your family and your friends. Merry Christmas and a happy new year!